Vertical transport of currents across interfaces affects, e.g., solar cell functionality. A coherent-control protocols regulates selective transport of electrons, excitons, or pure two-particle correlations through semiconductor interfaces, as shown by a sequence of terahertz pulses applied to a double-quantum-well structure to initiate vertical excitation transfer between wells. Microscopic theory explains how this efficient and highly selective transfer works in the presence of unavoidable scattering and dephasing processes. 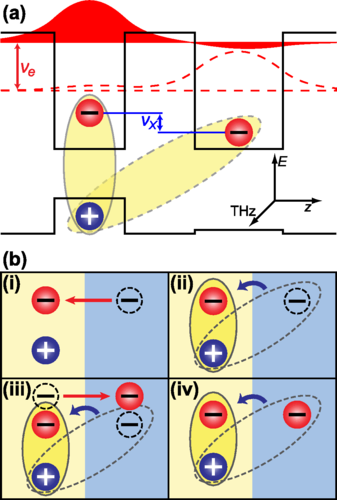 (a) Schematic configuration of the conduction- and valence-band edges of a double-QW structure with type-II band alignment. Here, the energetically lowest unbound electron-hole pair is indirect. (b) Schematic presentation of protocols. While holes (blue spheres) remain in the left QW, electrons (red spheres) move through the interface, yielding (i) electron, (ii) exciton, and (iii) pure exciton-correlation transport. The dashed symbols denote the initial state and arrows identify the transitions; the net effect of protocol (iii) is summarized in frame (iv).

To study the fundamental physical properties of electronic excitation transport through interfaces between different semiconductor materials (vertical transport), a coherent control scheme was designed that makes it possible to selectively transfer charges, charge clusters, or even particular correlation properties through internal interfaces. In particular, vertical-transport protocols were developed that utilize sequences of terahertz (THz) pulses and can be applied to a wide variety of semiconductor heterostructures. These protocols were then applied to a model system, i.e., an optically excited, type-II double-quantum well (QW) structure. In this structure, the holes remain fixed in one of the wells while the electrons can be moved between QWs. 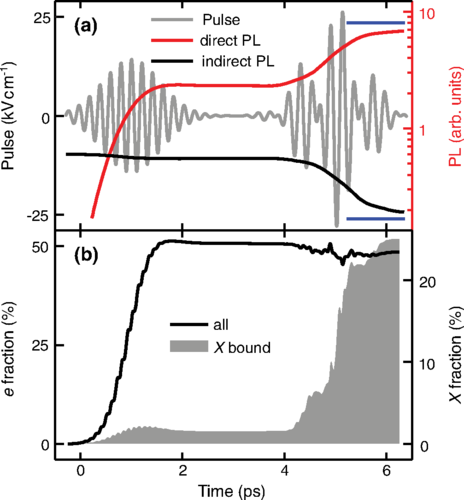 (a) A dual THz pulse (gray) is shown with the time-resolved luminescence at the direct (red) and indirect (black) exciton peak; vertical lines identify the luminescence levels reached when the second pulse is replaced with the pure exciton-transport protocol. (b) Fraction of all (solid line) vs exciton-bound (shaded area) electrons as a function of time.

Systematic microscopic calculations show that a sequence of THz pulses can selectively transport either electron plasma or bound electron-hole pairs (excitons) through the interface. Through precise frequency tuning of the pulse sequence, it is not only possible to induce the selective electron or exciton transport, but also to design a protocol where purely exciton correlations are transferred across the internal interface. In other words, neither electrons nor excitons are transported in this case, only the correlations move through the double-QW interface. Importantly, the pure exciton-correlation transport is detectable by monitoring of the time-resolved photoluminescence.

The new protocols are significant in that their deviation from ideal operation is below 6 %, this suggests that they are sufficiently selective for characterization and utilization of interface properties in nanotechnology applications.