In a joint effort, chemists and physicists of SFB 1083 developed for the first time a general strategy for solving this problem: Using substituted cyclooctynes, they were able to obtain well-defined inorganic-organic interfaces on Si(001), with the bifunctional molecules being attached to the silicon surface solely via cyclooctyne’s strained triple bond. The second functionality of the substituted cyclooctyne is thus available for further building up of complex molecular architectures, e.g., using organic click chemistry. 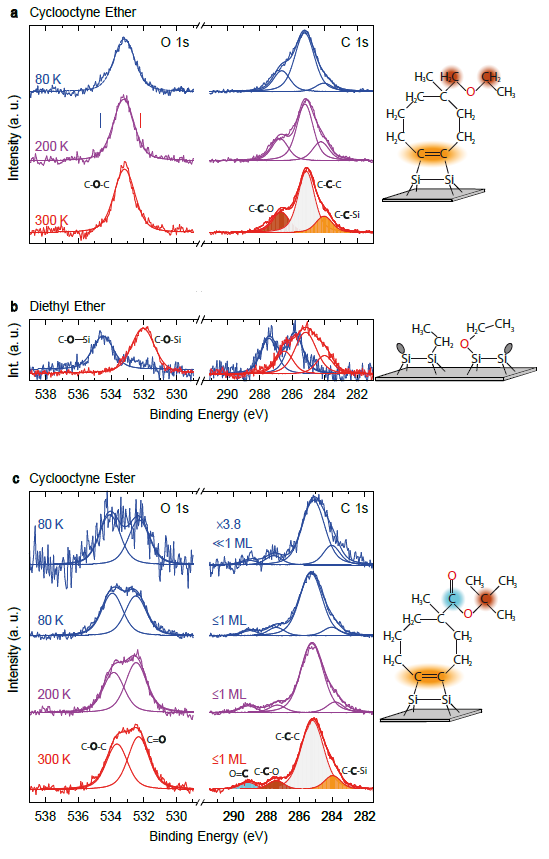 XPS results unambiguously demonstrate the chemoselective adsorption of both, cyclooctyne ether and cyclooctyne ester, on Si(001) via the strained triple bond of cyclooctyne.

The strategy for the observed chemoselectivity is based on the distinctly different adsorption dynamics of the separate functionalities: The strained triple bond of cyclooctyne adsorbs on silicon via a “direct” reaction channel. In contrast, almost all other organic functional groups adsorb on silicon via an “indirect” reaction channel, which makes them effectively unreactive in competition with the direct pathway of cyclooctyne’s strained triple bond. As a consequence, the concept is largely independent on the nature of the second functional group, which can be chosen according to the further reaction schemes employed. The cyclooctyne layer thus forms a versatile interface between the silicon substrate and the world of organic chemistry; it can be the basis for a multitude of applications, e.g., the integration of optically active organic layers on silicon devices. The obtained structures are also of high interest for further studies of the electronic properties at organic/semiconductor interfaces within SFB 1083.