A new experimental setup for time-resolved two-photon photoemission (2PPE) is reported. The method, which combines femtosecond pump-probe techniques with photoelectron spectroscopy, makes it possible to map the dynamics of electron transfer processes at surfaces and interfaces directly in momentum space.

The new experiment combines a high-harmonic generation (HHG) light source, developed and built in Marburg, with a state-of-the-art 3D hemispherical electron analyzer (VG Scienta DA30). The analyzer can measure electron energies as a function of both parallel momentum directions (kx and ky) without movement of the sample. The highest electron momentum accessible in photoemission, the so-called photoemission horizon, is directly related to the photon energy available. The high-harmonic source gives access to the full 2D Brillouin zone whereas conventional 2PPE setups are restricted to electrons near the 𝛤 point.

(a) Sketch of the experimental setup. (b) Brillouin zone of MoS2 and photoemission horizon (dashed circles) for 2PPE with laser systems that use UV light as a probe (green dashed circle) and for HHG-based systems (blue dashed circle). 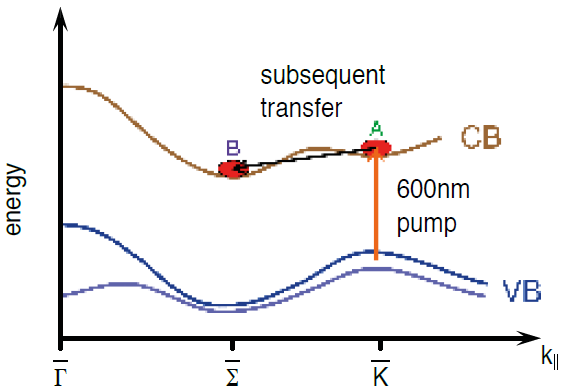 The large parallel momenta, which become accessible with the new experiment, enable SFB 1083 to study electron dynamics at interfaces of many interesting new materials. Particularly, in the class of two-dimensional transition-metal dichalcogenides (TMDCs), most of the interesting electron dynamics take place at the boundary of the first Brillouin zone. Investigations of the intervalley scattering in the topmost layer of MoS2, a prototypical TMDC, demonstrate this capability. Electrons excited at the K-point are found to scatter to the Σ-point in less than 50 fs by directly mapping the electron population in k-space as a function of time.

The new experiment opens up the possibility to study charge transfer and exciton formation with 2PPE in a variety of systems, most prominently van-der-Waals heterostructures, which are a combination of different single-layer TMDCs. In these systems, upon excitation, charge transfer excitons can form. Their formation and relaxation pathways can now be examined by a direct mapping technique in momentum space.

Pump-/Probe scheme with the excitation at K followed by the ultrafast transfer to Σ (left). In the delay series (below) the fast transfer to Σ can be observed, where the population appears within the first time step (center). A population remains visible at both high symmetry points over the observed delay range.