In a new publication by members of project A2 of SFB 1083, the authors identify unexpected chemical modifications at interfaces between the organic semiconductors Pentacene and Buckminster-Fullerene. 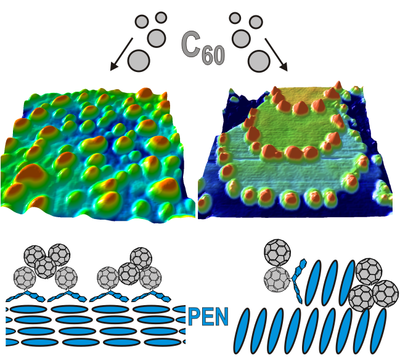 En route to the fabrication of reliable and efficient organic photovoltaic cells (OPV), a number of fundamental physical processes remain poorly understood. In many OPV devices polymeric compounds exhibiting rather undefined structures are being used both as donor and acceptor material, which hampers detailed interface-related studies. Therefore, well-defined model systems for OPVs are required to gain a deeper understanding of the charge transfer at the internal interfaces. One such model system is the combination of the organic donor-type semiconductor Pentacene and the acceptor Buckminster-Fullerene (C60).

In previous studies the internal structure and electronic characteristics of this organic multilayer interface were analyzed, both by experiment and theory. In our present study, we identify an unexpected and very important effect: at the interface, the compounds do not remain chemically separated from one another but instead form
supramolecular adducts. This adduct-formation by chemical Diels-Alder reaction leads to severe changes of the electronic characteristics of the internal interface which strongly determines the properties of potential OPV devices. We show that the supramolecular adducts are preferentially formed upon post-deposition heating of the blends and that the dimers exhibit strongly enhanced thermal stability as well as modified spectroscopic characteristics compared to pure Pentacene.

In all hitherto known studies of this model system with a focus on device properties as well as theoretical modeling, the molecular constituents have been considered as chemically inert. Thus, identification of the novel process presented here is of utmost importance for understanding the physical properties of this interface, e.g. regarding charge transfer characteristics. The present findings will influence a number of current studies that are conducted within SFB 1083 and stimulate additional future work in this field.

T. Breuer, A. Karthäuser, and G. Witte
Effects of Molecular Orientation in Acceptor-Donor Interfaces between Pentacene and C60 and Diels-Alder Adduct Formation at the Molecular Interface
Adv. Mat. Interfaces (2016) DOI:10.1002/admi.201500452