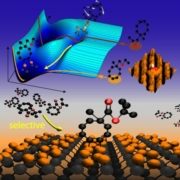 Chemists and physicists of SFB projects A8 (Koert) and B5 (Höfer) demonstrate for the first time the controlled chemoselective attachment of bifunctional organic molecules to silicon. 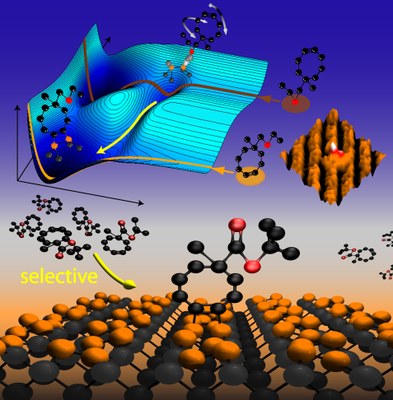 With these results, which were highlighted on the cover page of The Journal of Physical Chemistry, an interface between silicon and organic multilayers has been created [1]. This interface opens the road for a controlled functionalization of silicon with organic molecules. In this way, it offers new perspectives in semiconductor technology (“More than Moore”).

Chemoselective attachment of multifunctional organic molecules is the first fundamental process step for the controlled organic functionalization of semiconductor surfaces. However, the high reactivity of pristine silicon surfaces, especially of the technologically most relevant Si(001) surface, has prohibited so far such a controlled functionalization: multifunctional molecules do not show chemical selectivity on these surfaces but are found with different functional groups attached.

In a joint effort, chemists and physicists of the SFB 1083 “Structure and Dynamics of Internal Interfaces” developed for the first time a general strategy for solving this problem: Using substituted cyclooctynes, they obtained well-defined inorganic-organic interfaces on Si(001) with the bifunctional molecules attached to the silicon surface solely via a cyclooctyne’s strained triple bond. The second functionality is thus available for further building up of complex molecular architectures, e.g., using organic click chemistry. The strategy for the observed chemoselectivity is based on the distinctly different adsorption dynamics of the separate functional groups and thus widely applicable.

In combination with the results for controlled multilayer synthesis in solution using the same classes of molecules [2], this work is a promising basis for a multitude of applications combining semiconductor technology and organic chemistry, e.g., the integration of optically active organic layers on silicon devices. The obtained structures are also of high interest for further studies of the electronic properties at organic/semiconductor interfaces within SFB 1083.