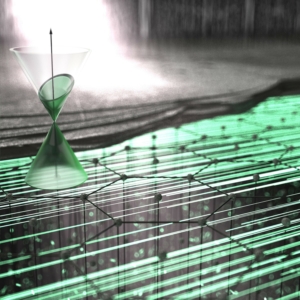 Artistic view of the experiment (image by Brad Braxley parttowhole.com).

Johannes Reimann, Jens Güdde and Ulrich Höfer together with a team led by Rupert Huber in Regensburg have taken band structure movies of electrical currents carried by Dirac electrons as they are driven by an intense THz wave.

Animation of photoemission snapshots of the topological surface state in Bi2Te3 showing the back and forth acceleration of Dirac electrons at optical clock rates by an intensive Thz electric field.

The investigated currents consist of spin-polarized electrons confined to the uppermost atomic layers of the topological insulator Bi2Te3. The electrons were observed to react in an in­ertia-free fashion to the driving field, whereas spin-momentum locking lifts scattering times abo­ve 1 ps. This scenario enables giant sur­fa­ce cur­rent densities and bal­­listic mean free paths of several 100 nm, exceeding values obtained in conventional materials by or­ders of magni­tu­de. Based on this discovery, it might be possible to realize new lightwave-driven electronics in the future, combining low power consumption and clock rates that exceed those of conventional semiconductor devices by a factor of 1000 and more.

The work of the two groups and collaborators in Novosibirsk and Hiroshima not only merges two novel and promising concepts in physics – topology and lightwave electronics. It also combines the expertise of the Regensburg group to manipulate electrons in solids with intense single-cycle terahertz (THz) transients, with the capabilities of time and angle-resolved photoelectron spectroscopy (ARPES) developed in Marburg.  The experiment conducted in Regensburg represents the first an­gle-re­­sol­ved pho­to­emis­sion spec­tro­scopy with subcycle resolution. It allowed Reimann and coworkers to directly ob­ser­ve how the car­rier wave of a te­rahertz pulse ac­celerates Di­rac fermions in the band­ struc­tu­­re. The resulting strong re­distribution in mo­men­tum space was directly mapped out in an ultrafast movie (Figure on larger screens).

In future experiments, it will be explored whether the topological protection responsible for the long scattering times at the Bi2Te3/vacuum interface survives when the material is covered by a protective cap layer as this is a prerequisite for device application.

See also:
Joint press release of the Universities of Regensburg and Marburg (in German).
Blog Post “Topology at Cyberspeed” by Ulrich Höfer.
Homepage of the Huber group in Regensburg.