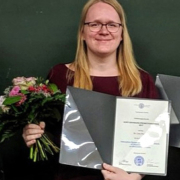 Congratulations to Dr. Lisa Pecher, former PhD-student of the SFB in the Tonner group (Project A6), for being awarded the Kurt-Dehnicke prize of the Department of Chemistry for her outstanding PhD thesis finalized in 2017. 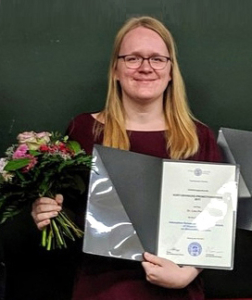 Semiconductor surfaces are the basis for microtechnology and major applications like photovoltaics. Improving their efficiency and applicability toward future demands on materials requires functionalization with suitable molecules. Fundamental research can help here to understand the interaction between molecules and surfaces.

Lisa Pecher brought significant progress to the understanding of how organic molecules interact with semiconductor surfaces. In her thesis titled “Adsorption Dynamics and Bonding Analysis of Organic Molecules on Silicon(001) Surfaces” – funded and supported by SFB 1083 – she combined static and dynamic quantum-chemical methods with insightful qualitative and quantitative analysis of the electronic structure in extended systems to provide a unique view on the interaction between adsorbates and surfaces. She developed new, efficient approaches to tackle the complex interplay of atomic and electronic effects that need to be treated accurately to derive new insights. Inspired by chemical bonding concepts successfully used in molecular chemistry, she revealed surprising parallels in the realm of surface chemistry. For example, she pointed out for the first time that a well-known reaction mechanism for organic chemistry –second-order nucleophilic substitution – can be found in the reaction of ether molecules with silicon surfaces. This was the key insight explaining the product distribution and published in the chemistry flagship journal Angewandte Chemie (link).

In a further step towards actual device applications, the authors then transferred their findings and the developed preparation protocols to polycrystalline electrodes, demonstrating that the same work function changes can be observed also on “real-life” electrodes. With the end user in mind, the team also tested the air stability of their contact primers, proving that a sacrificial phthalocyanine multilayer serves well to protect the highly ordered mono- and bilayer contact primers during air transfer and can be removed by thermal desorption afterwards.

This was just one of nine publications in major scientific journals – all of them as first author, two of them highlighted on the cover pages. She summarized these impressive scientific results in a review article which was highlighted by science writers and bloggers worldwide (see the SFB news item for more details).

More coverage of the prize-giving event is found here (in German).