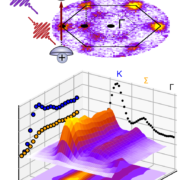 In a publication in Nano Letters, Robert Wallauer and co-workers trace the early-stage exciton dynamics in a two-dimensional semiconductor and report first results on the ultrafast formation of momentum-forbidden dark excitons.

Excitons that form out of electrons and holes at different locations of the Brillouin zone, so-called dark excitons, play a key role for the optical properties of TMDC monolayers in general and for the formation of interlayer excitons in TMDC heterostructures, in particular. Whereas dark excitations are difficult to access by purely optical experiments they can be imaged directly in momentum space by time- and angle-resolved photoelectron spectroscopy [Madéo et al., Science 370, 1199 (2020)]. With the superior time-resolution of the momentum microscope operated by B6 (Höfer/Wallauer), the dynamics of formation of a dark KΣ exciton could now be resolved for the first time. 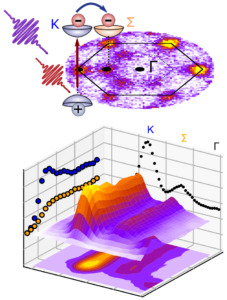 The formation process occurs on timescales where coherence between valence and conduction band play a major role.  The short pump pulses of the experiment induce an optical polarisation in the K valley. This polarisation was found to decay and form bright and dark excitons in a few tens of femtoseconds after optical excitation.  A fully microscopic theory by B9 (Malic) revealed the influence of the coherence on the formation process of the excitons, in excellent agreement with the experiment that could tune the excitation energy.  The high quality WS2-samples for the measurements were provided by the Huber group in Regensburg, who earlier succeeded in probing momentum-indirect excitons via the intraexcitonic 1s-2p transition [Poellmann et al., Nat. Mater. 14, 889 (2015)].

Future experiments of this kind will address the role of dark excitons in the formation process of interlayer excitons. The excellent agreement between experiment and theory in this work holds great promise to investigate such charge transfer processes on a microscopic level.