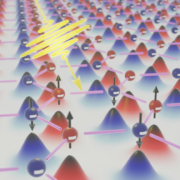 Sketch of the 2D Wigner crystal with a honeycomb lattice and alternating spin polarization. The colored curves underneath the particles illustrate their wave functions. Reprinted with permission from Brem et al. Copyright 2022 American Chemical Society.

Wigner crystals are solid, crystalline phases of electrons, formed at low temperatures in order to minimize their repulsive energy. This formation is one of the most intriguing quantum phase transitions and their experimental realization remains challenging since their theoretical prediction. However, the strong Coulomb interaction in monolayer semiconductors represents a unique opportunity for the realization of Wigner crystals without external magnetic fields.

In this work, the group of Ermin Malic predicts that the formation of monolayer Wigner crystals can be detected by their terahertz response spectrum, which exhibits a characteristic sequence of internal optical transitions. The density matrix formalism was used to derive the internal quantum structure and the optical conductivity of the Wigner crystal and to microscopically analyze the multipeak shape of the obtained terahertz spectrum. Moreover, a characteristic shift of the peak position as a function of charge density for different atomically thin materials was predicted and showed how the results can be generalized to an arbitrary two-dimensional system.

The results will guide future experiments toward the detection of Wigner crystallization and help to study the interaction dynamics in pure and generalized Wigner crystals in twisted bilayers.