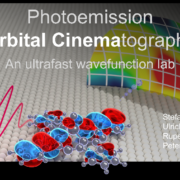 The European Research Council (ERC) awarded a Synergy Grant of up to 11.4 million Euros to the project “Photoemission Orbital Cinematography: An ultrafast wave function lab” in short “Orbital Cinema”. 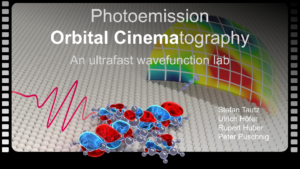 The new project is led by the SFB members Ulrich Höfer and Stefan Tautz, the SFB associated member Rupert Huber in Regensburg, and Peter Puschnig in Graz. It will involve Ulrich Koert and Jens Güdde as associated partners. The central goal of Orbital Cinema is to reach sub-cycle time resolution in orbital videography and to actively shape and functionalize molecular orbitals with lightwaves.

The foundation for this new research direction has been led by two key achievements of SFB 1083. In 2018, the Höfer and Huber groups showed how surface and interface processes driven by strong electric fields can be investigated by angle-resolved photoemission spectroscopy with sub-cycle time resolution [J. Reimann et al., Nature 562, 396 (2018), see SFB news]. In 2021, the projects B6 (Höfer/Wallauer) and A12 (Tautz/Bocquet/Kumpf) successfully combined photoemission orbital tomography invented by Peter Puschnig with laser-pump-probe techniques and demonstrated that orbital images can be traced in this way on ultrafast time scales [R. Wallauer et al., Science 371, 1056 (2021), see SFB news].

With its ERC Synergy Grants the European Commission funds high risk projects with up to four PIs that target truly groundbreaking research which cannot be tackled by an individual research team alone. Orbital Cinema has several very ambitious goals: On the picosecond timescale, it is to take movies on the orbital level of a chemical reaction from the initial state over transition states to the final product. In the femtosecond timescale, it is the ability to control charge transfer processes at interfaces such as those underlying light harvesting. Finally, at the attosecond timescale, the ultimate goal is to resolve and sculpt what is presently called an instantaneous quantum leap.

– Press releases of the Forschungszentrum Jülich, the universities of Regensburg and Graz